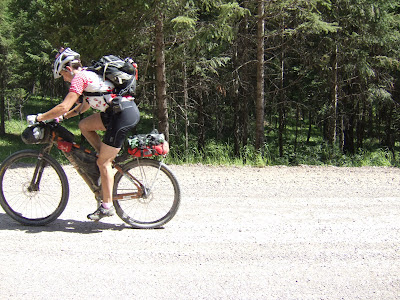 It sounds like Jenn Hopkins is going to continue on in the GDR from Abiquiu, NM after being treated for Giardia! That's the most bad ass thing I've heard in a long time. And to think that I dropped out simply because I was a bit tired. Thanks Jenn, like I needed anything else to make me regret my decision even more :)

Also Carl and Rainer have both finished in 2nd and 3rd place respectively and Simon is in Silver City and certain to finish sometime on Wednesday. And Fred might be in position to finish sometime on Thursday. Going into this year there were only 5 people who had ridden from border to border in less than 20 days. There may be 5 more added to this list, making this by far the strongest field to ever race the route together. Another observation: seems like the key to this race is to be from somewhere other than the U.S... John is the only American finisher so far and Noah is the only American still in the race. There were 6 foreigners who started the race and 5 of them have either finished or are still on the route. Conversely there were 12 Americans and 10 of us have pulled the plug to this point!
Posted by Geoff at 10:27 PM