Last Thursday I sat down to write a letter to my friend, Glenn Frick. I knew this would be one of the most difficult letters I would ever write. Glenn was in a hospital in Seattle fighting lung cancer, and the doctors had recently declared that his condition was terminal, and all they could do was keep him as comfortable as possible in his remaining days. No matter how much I wanted to remain hopeful, I knew that the reality was that I was writing him to say goodbye. I've never been very comfortable with goodbyes, so this ultimate goodbye was certain to be anything but easy to write.

I have written about Glenn, and the impact that Glenn has had on me, at least a couple times in the past: Here and Here. Glenn is without question one of the kindest, wisest, strongest, happiest, most generous, and most inspirational people I have ever known. If I've ever had a hero in running, or in life in general it has been Glenn. Certainly Glenn is the closest thing I have ever had to a running mentor. I have learned more about the complex and yet so simple activity that is running from Glenn than from everyone else combined.

As I finished the letter and walked it to the mailbox I had a very ominous feeling that Glenn would never read it. I last talked to Glenn less than two weeks prior, and although he didn't have any definite diagnosis at that time, he sounded vulnerable, weak, and scared. This was a side of Glenn that I had never seen. Glenn has more intuition about his body than anyone I know. I couldn't stop thinking about how serious this must be if Glenn was feeling that it was serious. I've learned to always trust Glenn's intuition, and now I was wanting so badly for him to be wrong.

As usual, Glenn's intuition was correct. He passed away Friday morning after 5 days in the hospital.

Later that morning I walked down to the mailbox to retrieve the goodbye letter that Glenn will never read. The letter had turned out to be surprisingly easy to write. It seemed strangely simple to say goodbye to him, and I didn't feel much of a sense of regret that I wasn't able to communicate these words to him before he moved on. I wondered if I was just so sad and shocked by all of this that I was in denial, and was closing off my emotions as a defense mechanism? I'm sure this was the case to some degree, but I also could tell that there was something else going on.

As I walked back from the mailbox with the letter in hand, tears running down my face, and the sun warming my bare neck and arms, I realized then the other reason why the letter had been easier to write that I would have expected, and why I didn't feel a strong sense of regret at not getting the letter to Glenn before he died. The reason was that with Glenn I had already told him everything. Glenn was one of those people that you couldn't help but admire. To know him is to be inspired by him. There was never anything subtle about Glenn's admirable qualities. So much so that I had, on numerous occasions, expressed my admiration, respect, appreciation, and love for him. The letter was just a reiteration of all of that. It would have been nice to say it all to him one last time, but in the end it didn't really matter. Glenn was such a one in a million person that I had already expressed some form of everything in the letter, not because he was sick and dying, but because with Glenn I couldn't help but express how great I thought he was long before he was sick. I later found out that he had even made the joke that my article from this past fall (that I linked above) sounded like an obituary. Glenn always had a great sense of humor, and as I already touched on, an other worldly sense of intuition - even when making sarcastic jokes.

Here is what the letter I wrote last week said. Outside of a few specifics, not really anything I hadn't already expressed to Glenn in the past:


Glenn, I've been thinking about you a lot these last couple weeks. I'm sorry for the pain and discomfort you are feeling. I just wanted to say thank you, though. Thank you for all your kindness, joy, and wisdom. I have learned more about how to live a happy, healthy, and satisfying life from you than you'll ever know. Juneau has become a very special place for me, and a large part of this has to do with you. You have taught me to appreciate and fully understand the things that are positive in that place. I keep thinking about how much I wish I could still go into those mountains with you, but then I get so much joy in remembering everything we have shared on those mountain ridges. Taku back to town was the last run we did together, and was one of the best days of running ever for me (even if I had a hard time keeping up with you). I've heard you often say that you have no regrets. I certainly have no regrets about all the amazing times we have  shared in those mountains. I plan to take you with me in my heart and my mind every time I venture out there. I love you friend.

Of course the fact that I told Glenn exactly how I felt about him while he was alive, and before he was sick, doesn't make his death any easier to come to terms with, only a little easier to not feel regret at not being able to say goodbye to him. I can't stop thinking about how vital, healthy, and strong he was just a few months ago. The last run I did with Glenn was this past August. We rode 3 hours in a boat, got dropped off several miles up Taku Inlet, and ran a series of mountain peaks all the way back to town. In all it was a 12 hour 'run' with about 10,000-12,000 feet of vertical gain in 20-25 miles. I was lucky enough to do dozens (or hundreds) of these types of runs with Glenn in the past 6 years. I could write pages and pages of stories about the amazing runs we've done together, and the amazing things he's done on each and every one.

One thing I do find myself taking comfort in is knowing how full of a 75 years this man lived. He seemingly only ever knew a month or two of physical weakness in his entire life. A few weeks ago he took what I'm pretty sure was his first pain medication of his life. I don't think he had ever even taken an aspirin or ibuprofen until last month! I honestly thought Glenn might out live me even though he was born nearly 40 years before me. I believed we would be running mountain ridges together when he was 85 or 90 years old. It feels horrible right now to know that I'm never going to get to do any of this with Glenn, but I do find great comfort in the knowledge that he lived well over 100 years worth of life in his 75 years, and that we spent several hundred hours together running mountain ridges in the 6 or so years that we knew each other.

Glenn's influence and impact on the Juneau community, and especially the running community is beyond measure. He inspired, encouraged, and taught so many people to be better runners and better people. Even though he is gone there remains a community of hundreds of people who are each several times better people and better runners for having shared time with Glenn. As a collective group we are a hundred times stronger, closer, and better off because of Glenn's influence. Glenn was the heart and soul of the Juneau running community for the past 50 years, and he helped make this community so vibrant and strong that even in his absence we remain immeasurably better off than we ever could have been without him. Steve Davis, a longtime member of this amazing running community summed it up perfectly last Friday upon hearing of Glenn's passing:

"Our old friend and running buddy, Glenn Frick, has once more gone ahead of us to check out the trail that lies before us all. But do not worry, as always he'll wait for us, we'll round that bend and there he'll be, baggy running shorts, torn and tattered tyvek jacket, well worn running shoes. We'll see his lithe and sturdy frame, peer into his pale blue eyes, he'll begin to tell us a story that is more like a riddle. As we follow him we'll once more marvel at his sure and agile stride as he leads us home".

My memories of Glenn would be incomplete without mention of how much he did the past few years to help turn my running camp into what it has become. It turns out that Glenn had a plan to start a very similar camp in Juneau many years ago. I'm very proud of what my camps have become, but I'm very aware that the time, energy, and effort that Glenn has volunteered has been a huge reason for the success of these camps. The simple joy, humor, knowledge, and grace which he shared with every participant he interacted with was without question one of the most valuable aspects of attending camp. I'm going to try my best (with the help of so many other great Juneau runners) to use what I learned from Glenn to offer as close as possible to the same great experience to future campers, but anyone who has attended camp in the past knows that the experience for future campers just won't be quite as rich and valuable without Glenn there to lead us up into the mountains.

Perhaps the thing that I will miss the most is the way Glenn brought people together, made people feel good about themselves, and made people appreciate everyone and everything around them. He knew when to treat people with tenderness and when to treat them with firmness. It seemed like no matter the situation, Glenn had a way of making everyone around him enjoy that moment in their life more than they otherwise would have. That is such a special gift. A talent that Glenn possessed more than anyone I have ever known.

Thanks for everything Glenn. I will never run into the mountains without thinking of you. 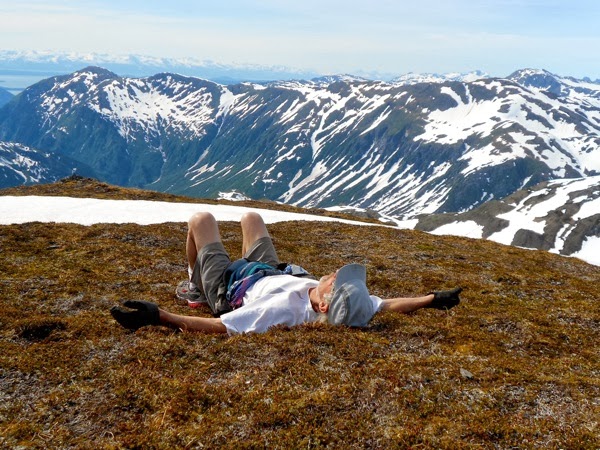