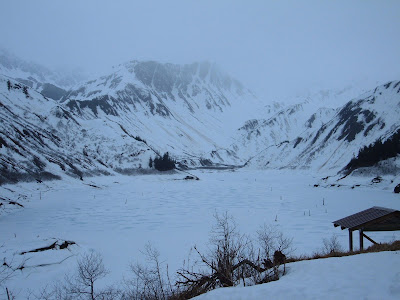 Decided to check out the Salmon Creek Trail today after work in hopes that it'd be mostly clear of snow. I was planning to be out for 2 hours or so, but once I get started on a trail I like to keep going until there is nowhere else to go, no matter how long it takes. I had never been up the this trail before and it turned out to be much more of an adventure than I had bargained for. It had a little bit of everything: ice, snow, mud, roots, rocks, steep climbs, fallen trees, avalanche debris, and some great scenery. In other words a very fun run. I'm wiped out though. It was one of those runs where almost every step was a challenge to keep good footing. Running smoothly on technical trails is something that has to be practiced regularly and right now I am very out of practice. Running on snow is what I am used to right now. Snow forgives, rocks and roots do not. I now have a nice shin bruise that proves this point. 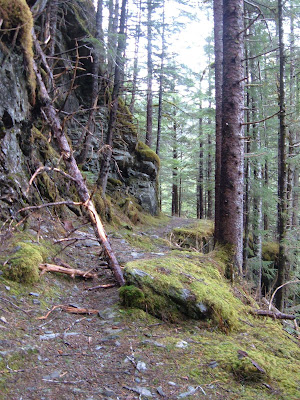 One of the Smoothest sections of trail 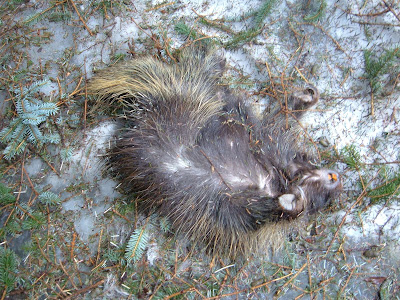 I'm definitely concerned about some pains in my feet that don't seem to want to stay away. They only seem to act up when I run for 2+ hours but pretty much every run that I have done over 2 hours in the past 3 months I have had ball of foot pain and at times arch and ankle pain. It's never all that bad and it almost always gets better within a few hours of finishing a run, but this is certainly something I'm nervous about as I begin to get more serious about my training in the coming weeks.

have you ever played with taping your arches?

Runner freind of mine down this direction does it if hes out longer then an hour....

Geoff, its not nice to punt the porcupines while trail running. Don't make me send this blog link PETA. :) Nice work on the big run.

hey nl, nice to see that your not totally anonymous anymore.

dave nice, i think i'll try the tape thing. thanks for the tip

dave byers, the weird thing is that this was one of 2 dead porcupines i saw on that run. i'm waiting for the knock on the door from PETA.

Icky pic, but great post. I'm heading back to the trails after mostly road running with all the knee stuff. Hopefully I don't do any running endos!