Saturday morning, 4:22 AM I awake in confusion from a very back loaded night of sleep. Before 1:00 AM I didn't sleep at all, but eventually I fell into such a deep sleep that at 4:22 it took me several seconds to figure out where I was and what that noise (my alarm) was. Once I reacquainted myself with reality my first thought was that I should just go back to sleep and skip the race. Finally though I snapped out of it and crawled out of my sleeping bag.

20 minutes later I found myself jogging the half mile from my campsite to the race start.

10 minutes later we were off and running.

It quickly occurred to me that I didn't really know who any of these guys were. The front runners quickly grouped into a pack of about 15 guys, but it was dark and I had, to my knowledge, only ever raced against one of these guys (Hal Koerner at Miwok earlier this year). I also knew which one Kyle Skaggs was, but beyond that I had no idea. What I did know was that I was blessed that day with some decent uphill spring in the legs. It's funny with uphill running. Some days it just doesn't feel like you're ever going uphill and other days it feels like you're going uphill the entire time. Lucky for me Saturday felt like it was going to be one of those good uphill days.

Eventually our group consisted of 13 and I found myself pulling easily to the front of the field on the climbs and falling back on the downhills. On the switchback climb from Muir Beach (mile 13) daylight broke and we were finally able to turn off our headlamps as we formed a single file line on the narrow trail to climb up toward Pantoll, with me in the front. In places these switchbacks were so short and tight that I could look to my side and see a continuous snake of the other 12 guys winding down around two full switchbacks. Still I was feeling very comfortable climbing and even considered for a bit making a move to try to shake the field up a bit. I wanted someone to go with me. I had no interest in breaking away by myself that early on. Kyle was running just behind me through this stretch but didn't seem very intent on trying to pull away from the others so I decided to just hang tight. Eventually the trail opened up and Matt Carpenter, Shiloh Mielke, and I pulled a bit ahead of the pack as we rolled into Pantoll (mile 18).

I had some friends lined up as a tentative crew but I had left a drop bag at Pantoll in case they weren't there. I didn't see my crew so I fumbled through my drop bag to get a second Gel flask and a bottle of Perpetuem, and drop off my headlamp, arm warmers, and earband. By the time I rolled out of there (perhaps 90 seconds later) I was behind the two runners who had rolled in the same time as me, as well as 3 or 4 others who didn't waste as much time at the aid station. For a few minutes I was a bit frustrated that my lack of organization and planning had just cost me precious time at that stage of the race, but quickly I remembered that in the large picture it almost certainly didn't matter and that I just needed to focus ahead of me, and that the race was really just getting started.

By the time we all rolled through Stinson Beach Aid Station (mile 21) we were grouped back together in a tight group of at least 7 or 8. Shiloh was a bit out ahead, but I felt a lot more comfortable being in a chase group with Kyle and Matt than being the guy out in front being chased. By the top of the climb it was once again Shiloh, Matt, and I running stride for stride with each other. Kyle and Uli were not far behind.

This was the point when Matt made his move. At about mile 25 he just took off and I kind of knew that I shouldn't go with him, or I would pay dearly later on. It was also right around this point that Shiloh pulled up and started walking, shortly after he had finished telling me that this was his first ultra ever! I guess he doesn't have the endurance mentality totally figured out just yet, but certainly a name to keep on the radar in the future.

By the mile 26 turn around Matt had about a one minute lead on me and Uli Stiedl was about a minute behind me and Kyle Skaggs and Tsuyoshi Kaburaki, from Japan, were maybe 2 minutes behind me. 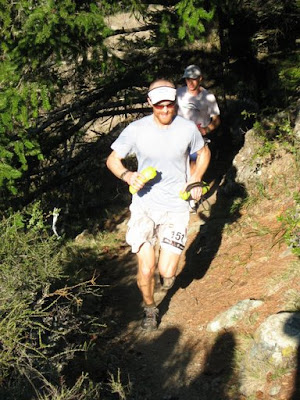 I very much liked the position I was in but I also knew that there was still plenty of time for things to change drastically. And almost right away they did. I held on to second place all the way through mile 30, but somewhere around there things started to go quickly downhill for me. My quads were really starting to ache and for only the second time ever during a race I was getting muscle cramps in my legs (mostly in my hamstrings). Uli passed by me right at mile 30; Tsuyoshi at about mile 32; and Kyle at about 37. I was particularly struggling when Kyle passed me.

By this point of the race we were getting mixed in on the trail with some of the 50k runners and on the rolling climbs in that area I found myslef very content to just walk for awhile behind some of the 50k guys on the steeper uphills. I was still feeling OK going up, but the downhills were feeling really bad and I thought maybe if I took a few of the climbs easy that things might come back around for me. When Kyle passed me I was feeling horrible and I spent several minutes trying to decide if I was going to pull out at the next aid station or not. I knew I had it in me to finish but I thought for certain that in doing so I would be passed by a dozen or more other runners and I just wasn't sure I wanted to go through that. Finally after several minutes thinking about it I decided I was just going to suck it up and finish no matter how long it took me.

The thought that I had any chance of maintaining my current 5th place position never even occured to me. It seemed so far out of the realm of possibility that I couldn't even remember for awhile what place I was in.

Somewhere after this though things started to improve. The cramping subsided and even the aches in my quads seemed to become less severe. By the time I got to the mile 41 aid station I was finding that my climbing strength was coming back to me. There were still 2 pretty long climbs left in the race and I knew that I could use them to make a shot at holding onto my 5th place position. Finding this new challenge to shoot for gave me even more strength and eventually I was running the uphills with the same pep I had 5 hours earlier in the pre-dawn stages of the race. On the long steady climb up out of Tennessee Valley (mile 44) I found myslef mixed in with some of the middle/back of the pack half marathoners and I was just blowing by them left and right. There was one steep climb in which I must have passed 20 runners in 2 minutes. For several minutes I was taking great pleasure in passing all these runners and then I snapped back to reality and remembered that I was not racing against these people, that there were 4 people in my race who were out in front of me, perhaps already finished. I felt like an idiot. I laughed out loud at myself. A few of them heard me and perhaps thought I was laughing at them. I thought about explaining to them why I was laughing but I was too far past them already.

From here the rest of the race was pretty uneventful. I knew that I had given up too much between mile 30 and 40 to have a chance of reeling in any of the 4 in front of me, but I also knew that I was now cruising along smooth and was not likely to be caught by anyone behind me. I finished in 5th place with a time of 7:12:35.

I am very happy with that time, and with 5th place in one of the strongest field of ultra runners assembled for one race in quite some time. For the second time this year though I feel like those trails in the Marin Headlands beat me up and humbled me quite a lot. I think I had good (but not great) races at both The Miwok and this past weekend, but I also feel like I have a grudge now with those trails. I've run 7 ultras now in my life and the only two that I did not win were these two in the Marin Headlands. These were also the 2 most competitive ultras I've ever run (and quite likely the two most competitive ultras in the country this year) so my frustration isn't with being beat by Dave Mackey, Jon Olsen, Matt Carpenter, Uli Steidl, Tsuyoshi Kaburaki, and Kyle Skaggs - but rather with being beaten by those trails in that area. They're very hard packed trails and I'm used to running on snow and mud here in Juneau. In both of these races I ended up with intense fatique in my quads - likely a result of so much downhill pounding on such hard surface. I'm thinking pretty seriously about running the Miwok again this coming May, but I'm also going to admit right now that I'm kind of afraid of those trails. A fear that I suspect will soon turn into some pretty intense motivation to get it right the third time around. And I'm also not forgetting that the Miwok 100k this coming May will be the last chance to qualify for what is shaping up to be one of the most competitive 100 mile races ever at Western States next June. 2009 could be fun...

If you run the Miwok in May, Paul and I promise to be much better supports!

Wow. Talk about keeping someone on the radar... You, my friend, are an awesome competitor and I like to think of what would've been had your cramping held off. You get that dialed in and you'll be the one no one wants to be chased by.
Looking forward to reading about your races next year.
Take care,
TL