For me it's always really easy to be excited for the bigger, planned out, "destination" runs that I do. These are the runs that you talk about for days (or weeks), you plan around your schedule and your friend's schedules, and you run a route or in a location that is somewhere that you have a specific interest in exploring. For me these kinds of runs are really easy to get excited about and to look forward to.
In stark contrast to these runs though, are the day in and day out runs that fill in the gaps between these larger, planned out runs. Often when I set out the door on "the daily run" I have no idea where or for how long I am going to go. Every now and then I do an entire one of these runs and never really come to a place of feeling like I want to be running at that time. More often than not though, I get a few minutes into one of these runs and things start to fade away. I stop thinking about the story I read while I was drinking my coffee in the morning. I stop thinking about the emails I sent just before heading out the door. I stop thinking about what I'm going to cook for dinner. Eventually my mind comes really present and I begin to really feel my body, and really notice the things going on in the mountains around me. Sometimes this only takes a few minutes, and other times it takes hours, but almost without fail, no matter how much I think that I didn't want to go out for a run on any particular day, I end up coming back home at the end of the run feeling nourished by the fact that I stepped out the door, onto the trail, and went off into the mountains.
I've always known that these daily runs were an important part of moving somewhere close to our potential as runners, but more and more lately I'm beginning to feel that these are actually just as important as the larger, more planned out runs. This might sound contradictory to a post I wrote awhile back talking about the importance of consistency over the long haul as compared to shorter term, day in and day out consistency. In actuality though, I think the two go hand in hand. I'm not saying that it's necessary (or even beneficial) to get out on a run every day, but rather that the shorter, less focused, less planned runs which fill in the gaps between the longer, more planned, destination runs seem to be the key to really being in the kind of shape we need to be in to push toward our physical potential as runners. You can have a lot of fun just doing the destination runs with friends, but if this is all you do you will slowly become less and less fit. I speak from experience here because this is essentially what I have done for the past 2 months. About two weeks ago I returned to the habit of filling in the gaps with shorter, less planned, even somewhat boring at times, daily runs. There is certainly nothing glamorous about these runs, but without them we quickly fall from being capable of performing at anywhere near our optimal level. In this regard these "mundane" runs might be as important as any runs we do. Physically I think we can get by without the big destination runs, and continue to become more and more fit, and more and more capable as runners. I don't think the same can be said for the daily runs that fill in the gaps.
I guess the obvious question then is, what about mentally? Can we continue to grow emotionally and mentally as runners if we are only doing the daily runs, and not the destination runs? That's an interesting question, and one that I think varies from person to person. For me I think the answer is no, and thus the need for both of these types of runs is created, neither one necessarily more important than the other. Both equally important parts of a sometimes difficult to solve puzzle. The one is certainly a lot more glamorous than the other, but glamour of course isn't inherently synonymous with significance, a reality that is sometimes easy to forget, especially in those first few minutes of a daily run when we feel like the last thing we want to be doing at that time is going for a run. Thankfully that feeling rarely seems to last for too long.
Posted by Geoff at 9:20 AM 10 comments:

Crawling Along The CDT

Scott and I have been trying to sneak in a 40+ mile run along the Continental Divide Trail from the Indian Peaks down to I-70 for the better part of the past month. Monday finally saw a day in which both of our schedules and the weather lined up to go for it. It was just in time as there is almost 2 feet of new snow here in Nederland today. Basically we waited until the last possible day before The Divide is snowed in until sometime next summer!
I was feeling really worn out from a recent trip to California and a 3.5 hour run on Sunday in Marin, but it was still really great to get out on the most adventurous run I've ever done in Colorado. Everything I've done in Colorado to this point has been on very established trail and in much more gentle weather. This route was all along the Contintental Divide Trail but at times the route was completely a guess and well over half of the run was so rocky and rugged that you couldn't even tell there was actually a trail somewhere in there. The other thing that was unique for me on this run is that I've never done anything where I've been up so high for so long. We went over two 13,000 ft. peaks and spent at least half of the 9 hours that we were out over 12,000 ft.
In the end we cut our route a bit shorter than we had hoped and bailed out at Berthoud Pass on Highway 40. We thought for sure we could average 4 miles per hour throughout the day, but when it was said and done we struggled to cover 3 miles per hour for the entire outing! It wasn't quite as rugged and wild as the more rugged stuff I do in Juneau, but it was very close. Sure is a bummer that the Divide is now buried under a few feet of snow because I can't wait to get up there again.
Here's some photos from the day: 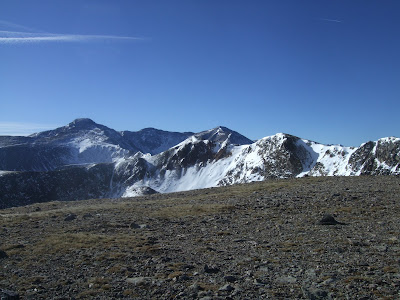 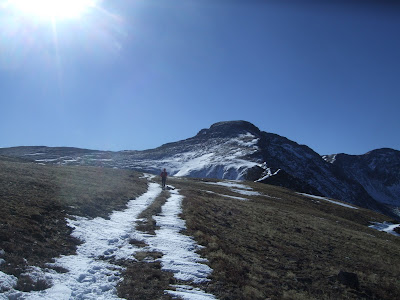 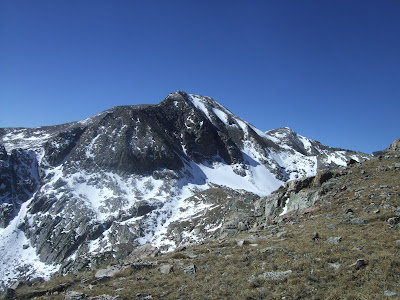 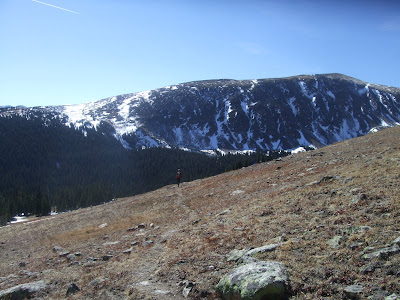 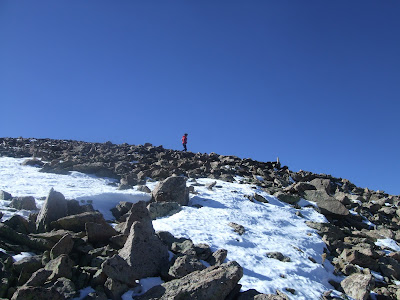 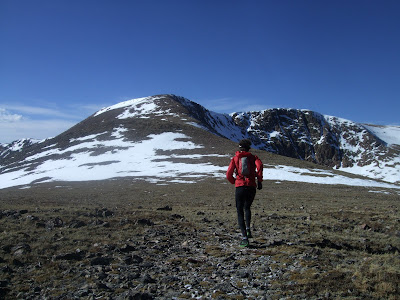 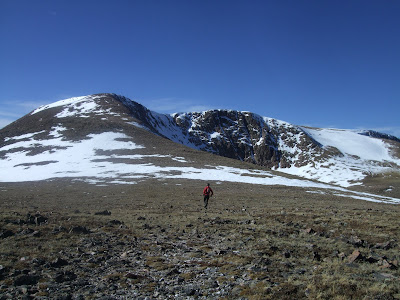 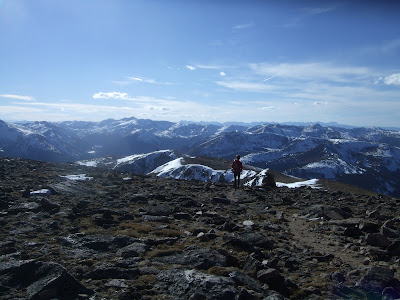 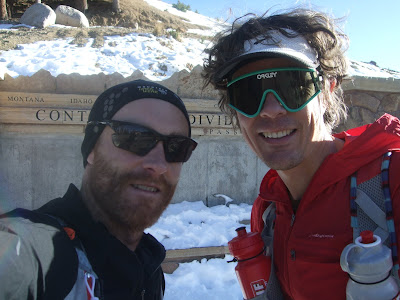 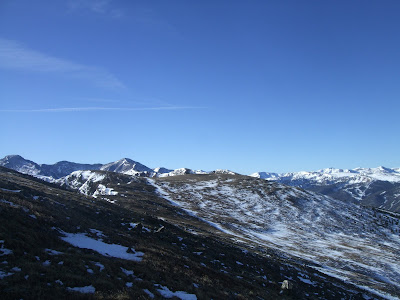 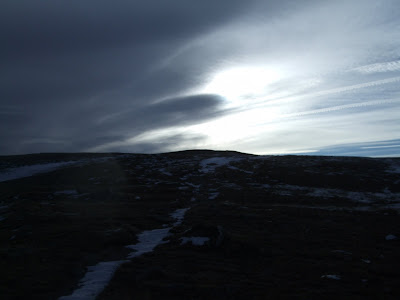 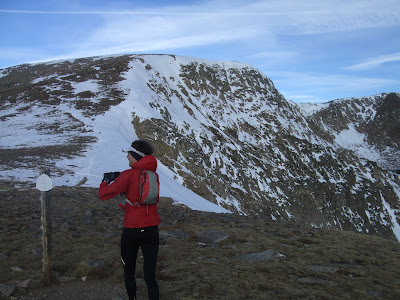 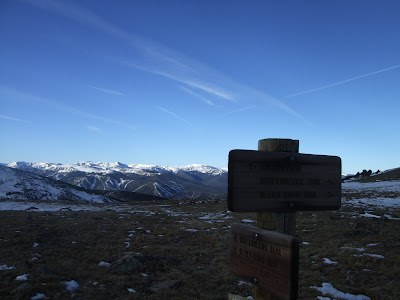 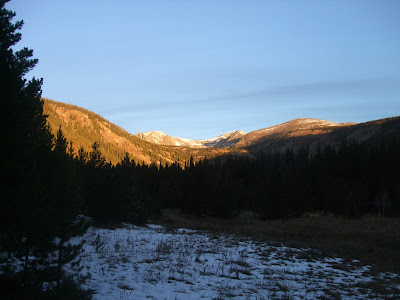 After nearly two months "off" since UTMB I decided that yesterday would be the day I would return to everyday running. I put "off" in quotes because in the 56 days since UTMB I have actually run over 400 miles, including a 100k race. In that time though I took 30 days completely off from running! So it hasn't been a typical two months off, but it has been the most number of days off from running that I've taken in a two month span in at least a few years.
I thought it to be very fitting that my return to everyday running yesterday was the first outing of the season in which I was running in snow and serious winter like conditions. The next 4 months for me will be very focused on preparing for and hopefully completing The Iditarod Trail Invitational.
I signed up for this race in April and it has been mostly out of my mind since then. There have been numerous times this summer when I doubted whether I actually wanted to try this one again. Yesterday though, as soon as I got up into the serious snow and wind that I ran up into I was more excited than ever for the coming winter running season, and attempting one of the most extreme and challenging winter races in the world. There's something about running in extreme winter conditions that is somehow really relaxing and really satisfying.
At the end of my run yesterday we had a half mile long stretch of straight road, heading directly into a 30 mph wind. You could see the trailhead where our car was at the very end of the straight away and it felt like it was going to take forever to get there. Everything about it pretty much sucked, and yet it was one of the most enjoyable moments I've running I've had in a long time. This brief moment was all I needed to be certain I am making the right choice in ramming my head against the wall of the ITI for a third time.
Posted by Geoff at 12:40 PM 10 comments:

I've been taking a little more time "off" since UROC. It's been 10 days since the race but I've only been on a few runs and only one of them was more than 60 minutes. I felt great after the race. By Tuesday I felt fully recovered but I think this last segment of time off (since August 21st I've taken 22 of the 44 days totally off from running) is going to do me some good going into some more focused training to get ready for NF 50. I still haven't decided for certain that I'm going to run that race, but my plan is to basically start training sometime toward the end of next week as though I'm training for it and then see how I feel after a few weeks of that. Between now and the end of next week I'm going to continue to take some "down time," but the weather and the Fall colors are simply too perfect right now to not get out in the mountains for at least a few long outings.
Scattered throughout the days of rest in the coming 2 weeks I've got some really long outings in mind as well, including what should be a really epic run with Joe up in Oregon this coming weekend.
I've done some of this type of "binge" running in the past when I've needed some rest time, but the weather was just too ideal to stay out of the mountains everyday. There's something kind of satisfying about laying really low for 3 or 4 days and then getting out for a full day run, and then repeating the cycle. I think I still prefer when I get out in the mountains most everyday, but for now I'm really looking forward to doing some of this binge running the next couple weeks. Dakota and I are going to hit up the Indian Peaks for 5 or 6 hours this afternoon to kick it off.
Posted by Geoff at 9:09 AM 6 comments: