Pretty mellow day today. Very slow ride and nice evening run checking out a trail that has just become clear of snow in the past couple days. I now have 3 trails I can run on and pretty soon there should be 3 or 4 more that are clear of snow. Can't wait for that.

There was supposed to be a 9 mile race on the Herbert Glacier Trail next Saturday. The trail begins directly behind my bike in this picture: 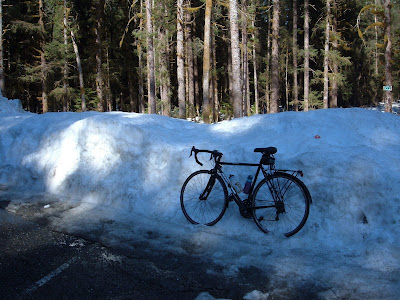 I found out today that they postponed the race until sometime in August. Bummer. I was looking forward to one last good race in the snow. Problem is that I would have probably been the only one to show up.

I ran on my high school's indoor track team for a couple years way back when. The thing I recall most clearly is how miserable of an ordeal the actual competitions were. There was only one indoor track in the area so that was always where we raced. Because there was only one track there were always about 30 teams at each meet, thus these were ridiculously long nights that usually didn't end until after 10pm. Then we would bus it 30 miles back to my school and my parents would have to pick me up to drive me the 30 minutes from there to home. It was rare to get home before midnight... and for some reason these were always on a Tuesday night. The worst thing though was the cough that you would always have by the next morning from running indoors in such a dry, stuffy environment. This cough commonly became known as "Manley Cough" because the races were held at Manley Fieldhouse in Syracuse, NY. Until last night I had never since experienced this same type of cough. Now though, for some reason I have had a case of "Manley Cough" both last night and tonight. It sure brings back memories. I suppose there are some things I miss from high school, but i can assure you, indoor track races are not one of them.

Totals for the week: run 36 miles and bike 174 miles in 18.5 hours. Only lifted weights once again this week. Want to start lifting twice a week. I guess that can be my goal for this next week.