Each year on the 4th of July thousands of runners and tens of thousands of spectators gather in Seward, Alaska for the running of the Mt. Marathon race. This year's race will be the 80th running and I was hoping to be one of the runners competing. The only problem is that you need to get drawn in a lottery to get into the race and I found out today that for the second year in a row I did not get in. I was pretty bummed when I looked at the list of lottery winners and did not see my name on it, but now several hours later I feel relieved that this is over with and I have a better idea of what races I will actually be competing in this summer. 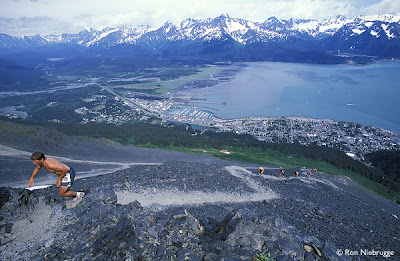 Runners competing in the Mt. Marathon race. Route climbs about 3,000 ft. in 1.5 miles and then returns to town where 20,000 spectators await the racers!

If I can afford the travel/entry fee expenses my plan will be to ride in the 24 Hours of Kincaid on June 23-24; Run the Crow Pass Crossing on July 21st; Run the Resurrection Pass 50 miler on August 4th, and possibly run the Equinox Marathon on September 15th. I'll also plan to run competitively in a couple local mountain/trail races and non-competitively (as tempo training runs) in some local road races. This will make for a nice year of racing (especially figuring in the Susitna 100 that I ran in February), but I can't help but think about how limited my options are since I live in Alaska. I read about other bikers and runners who have twice as many races lined up for this year and they will be able to drive less than 8 hours to get to most of them. I will need to fly at a cost of $350+ to each of the 5 races listed above (plus an extra $100 to get my bike to Kincaid). Add in the cost of race entry fees and I'll be spending over $2,500 this year to compete in 5 races!

There are a lot of things that I like about living in Alaska, but the one thing that will most likely tempt me back to the lower 48 will be if my interest in endurance racing continues to grow as I'm hoping it will.