I've worn Montrail Mountain Masochist on nearly every run that I've done in the past 4 years. They are by far the best shoes I have ever worn. I have tried several other shoes in this time, but my feet and my body have become so adapted to the Mountain Masochist that I find pretty much everything else fairly uncomfortable. I've found a few shoes here and there that I use for very specific conditions. For example the Montrail Badrock, with their really wide toe box and huge lugs on the outsole are perfect snow running shoes. On well over 90% of my runs though I have worn the Mountain Masochist.

I wear them on the most rugged, gnarly trails and I wear them on roads. Wet, dry, hot, cold, mud, sand, snow - pretty much every condition and every surface. It's been really great to have a shoe that I trust so much and feel so comfortable in, but I'm also aware that I've adapted so much to this one particular shoe that it's nearly impossible for me to wear anything else. As long as Montrail keeps making these shoes, and making them the same way, I have nothing to worry about. The reality though is that four years is a really long time in the running shoe industry. The Mountain Masochist are one of the few shoes in existence that are more or less the same as they were four years ago. Lucky for me. It's been a good run (sorry for the silly pun, I couldn't resist). For all I know Montrail might make the Masochist for another four years, but I'm not counting on it.

Enter my current health issues that have pretty much eliminated all running for me over the past 7 months. I try to find the good in all situations, and one thing that has been nice about not running for so long is that my body has essentially reset, thus I am no longer adapted so entirely to one shoe. I'm sure I will do a lot of running in the Mountain Masochist in the future, but it's been nice as I begin to run a bit more (I've been running one or two days a week the past several weeks) to explore some new shoes and actually be able to have a more natural response to them, rather than just wishing that I was wearing the Masochist. Through this process there is one shoe that I have become really excited about: The Montrail FluidFlex. 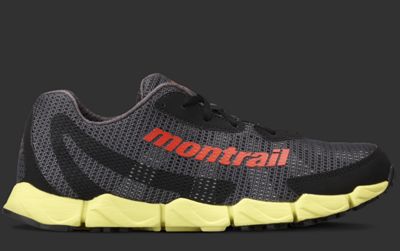 I've worn them on the last 3 or 4 runs I've done and absolutely love them so far. I've run in 4 or 5 shoes in the past that are less than about 8.5 ounces, and these are the first ones that don't feel too minimal to me. They pretty much feel like the same amount of support and stability as the Masochist, at 3 ounces lighter per shoe! I'm sure some of this is a result of the dynamic I mention above, and if I tried these shoes after I had just run a couple thousand miles in the Masochist over the last 7 months (instead of zero) they might feel a lot different. This said though, I have also been running a bit lately in the Montrail Rogue Fly, and although I like these shoes a fair amount, they feel like they support my feet and my body so much less than the FluidFlex (even though they are the same weight).

To make a long story short: if you haven't yet tried the FluidFlex I highly recommend them. Another good thing about them: at $90 a pair they are a steal compared to so much else that's on the market nowadays. For some reason, as the average shoe has been stripped down more and more the price has skyrocketed. Obviously this has everything to do with the demand for minimal shoes, but it's cool to see that Montrail isn't playing the game of charging $125+ for a pair of minimal shoes that so obviously uses far less materials and technology than other, more traditional shoes.
Posted by Geoff at 3:48 PM

How was the fit, narrow, wide? wide toebox?

No issues going from a 10mm drop to 4mm drop?

Tim C,
i would say the fit is pretty average. certainly not wide, but not overly narrow either.

Tim F,
haven't really noticed the difference in the drop, but i have only run ~15 miles total on them. When i've run in lower drop shoes in the past they always seem to trash my lower legs, but i think it's actually the general lack of cushioning more than the lower drop. in this case even though the drop is lower, they feel way more cushioned than any other minimal shoes i've worn.

I saw these the other day and was intrigued. I'm currently running in the Rouge Flys and haven't been thrilled with them so your comparison of these two shoes makes me want to go check out a pair even more. Thanks for the review.

Thanks for the review, Geoff. I will have to try some out. I've worn some Merrell Mix Masters with a 4 mm drop without a problem so these might be the Montrail's I've been waiting for.

Hopefully see these badboys in the UK soon! Montrail not the easiest gear to acquire on these shores!

Love my Mountain Masochists, but have been thinking about trying something with a little less aggressive tread for road/trail mixed run's! Was thinking The Fluidflex or Fluid feel would be perfect. Looking at your review and the price I think I am going to test out the FluidFlex!

I've been really interested in the FluidFlex. As far as size goes, how would they compare to the Masochist? Are you still wearing the same size? I also love my Masochists and have yet to find a trail shoe more durable over the long haul

C.J.,
They seem to me to be the exact same size as the Masochist. They seem a bit more narrow in the toe box, but in terms of length they seem exactly the same.

Great, thanks for the feedback!