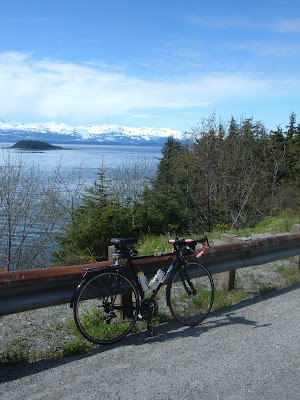 A 6 hour century ride isn't really very fast as far as most cyclists are concerned but for me this was easily the fastest of the now 3 century rides I've ever done (2 in the past 2 weeks). The only catch to today's ride was that I only ended up at 99.7 miles and my time wasn't actually 6 hours, but 6:12 to be exact. I thought about riding around the block once when I got home but decided that it was easier (and less neurotic) to just round 99.7 up to 100.

All in all I felt really good on this ride. The weather was perfect and I maintained decent leg strength all the way to the finish even though I had a 30-40 mile stretch in the middle of the ride in which I pushed at 17-18 mph. I was definitely a bit slower than this for the last 25 miles, but I still felt strong and felt as though I could have continued to push a harder pace, but I saw no reason to overwork my body.

Now I'm just sitting around waiting for info. to come through on everyone out there racing today. It appears as though Dave Harris may have set a new record on The Grand Loop Ride!!! Can't wait to hear more about that. And Mallie completed her 12 hour ride early this morning, covering 145 miles despite a knee that has been messed up for a few months. Very impressive. Gosh, I can't believe how much a geek I've become about following endurance events on the Internet... and to think that just a few months ago I would pick on Jill for her obsession with this.

These blogs can become addictive. Way to go on your century, Jeff. A six hour century is nothing to sneeze at. In a couple more weeks you'll be knocking it out even faster.