Anatomy of a Sled

This has been a great week of training. A little new snow has led to some of the best skiing yet this year (I've XC skied 40 miles this week as well as the usual 80+ miles of running) and I've had a chance to get out a couple times with my sled full of gear. Today was a very good test run with my sled. Pulling 30 extra pounds is just plain hard work but as I make small adjustments to my sled it continues to become slighter easier.

I've had a few people inquire about the specifics of my sled, and I'm sure it will evolve further before February 24th, but here's a breakdown of what I'm pulling behind me right now:

The sled itself is a basic $10 kids sled that I bought at the local drug store: 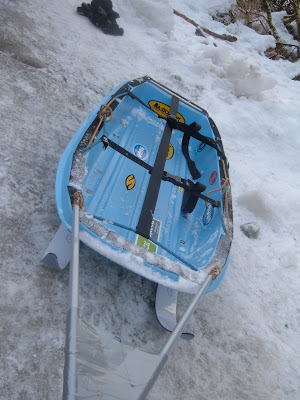 I've attached a pair of youth cross country skis (110 cm) to the bottom to reduce friction and allow it to slide easier. The blocks of wood raise it up for a bit more clearance in case there is some depth to the snow: 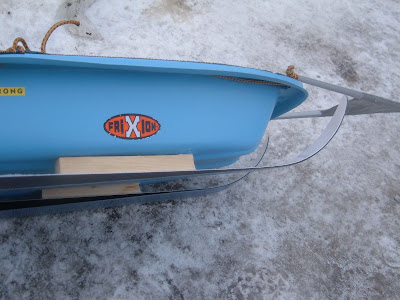 I laced some cordage around the perimeter of the sled and attached webbing and buckles to this that I use to secure the load in place: 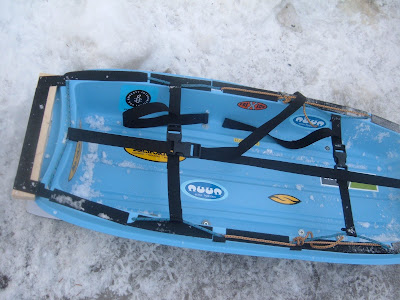 Also in the above picture you can see a strip of velcro all the way around the perimeter of the sled. I am currently sewing together an old rain poncho to form a cover that will velcro over my load and zip in the center. This will keep any loose or falling snow from filling up in the sled.

Here's a picture with some gear loaded in it: 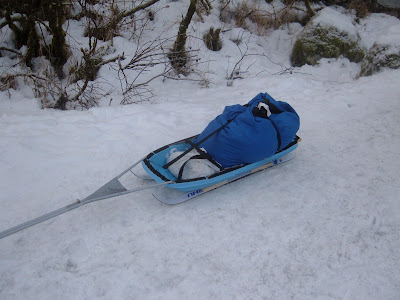 The pole is 2 cross country ski poles (160 cm) that are clamped together to form one pole and the lower 18" of each pole is bent (using a conduit bender to avoid kinks) outward about 4 inches so they attach to the front outer corner of the sled: 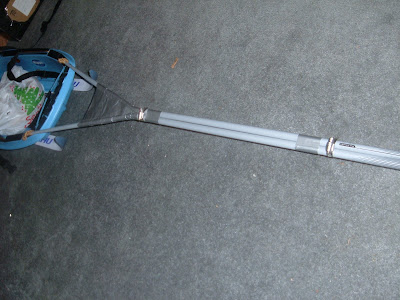 At the top of the poles I have attached two 18" pieces of flexible tubing which then attach (with duct tape) to the harness which I built out of webbing, an old z-rest sleeping pad, and duct tape. Right now I have vinyl tubing on there but I'm going to try to replace it with silicone tubing so it doesn't get so stiff (and potentially breakable) at cold temperatures: 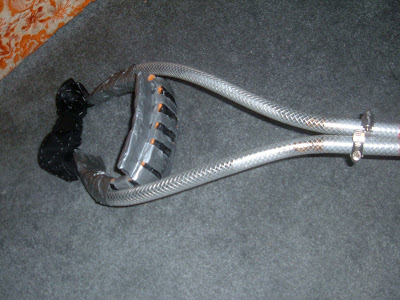 The poles are attached to the sled with perlon cordage that runs through the length of each pole and ties through holes drilled in the sled.

The end product is a sled with great control (unlike my system I used last year this sled is almost impossible to flip over and it tracks perfectly straight behind me no matter how uneven the trail is). I'm still tweaking it a bit to try to minimize the amount of shaking where it attaches around my waist but my new addition of the flexible tubing has helped greatly with this. I'm hoping silicone tubing will be flexible enough to absorb all of this shaking but not so flexible that it causes less control of the sled.

In all it's a pretty basic setup but it has taken me more than a year of testing and brainstorming to get to this point. I don't even want to know how many hours and how much money I have put into this thing. Almost every modification I have made evolved from an earlier attempt at the same modification that didn't work out so well. I've tried 3 different pair of skis, 2 harnesses, and 3 or 4 different pole systems. Hopefully the snow cover that I'm currently making works out ok on the first try because I've already spent about 2 hours working on it and I still have to sew a zipper in it and sew the velcro around the edge of it. I don't really want to deal with making a new one.

In the sled I'll be pulling all the gear to survive in interior Alaska in February: