Sticking with my now 2 week old tradition here goes another Saturday evening post with a bunch of unrelated random thoughts:

First an update on my calf. I've been able to run every day since Monday. I still had a little bit of pain through Wednesday but I've now done about 35 miles in the last 3 days with no pain at all. I'm pretty confident that won't be bothering me anymore. I'm planning to do about 20 miles tomorrow and then try to get in about 90-110 miles total this coming week. If the calf feels fine through that then all should be good.

I've got another pair of shoes that I'm never going to use so I want to give them away like I've done with a couple other pairs in the past several months. They are Inov8 Mudroc 290. I have worn them on exactly 2 runs so they are pretty much in new condition. They are just too narrow for my foot. They are a size 10.5 but I think they run about a half size small so they really fit more like a 10. And as I said they are quite narrow. 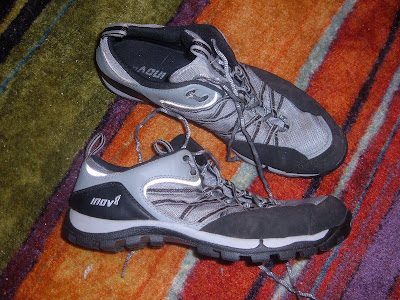 I'm going to do this one a bit different though. Rather than just giving them to the first person to email me for the cost of shipping I'm going to raffle these ones off instead. For $5 you'll get a chance at the shoes. Larger amounts in multiples of $5 will give you one more chance to win per $5 increment. The La Sportivas I gave away last month seemed to generate about a dozen or so people interested in them. This time around I would suspect no more than that so your odds will be pretty decent of winning them, especially if you send me a couple hundred bucks :) Doing it this way will give someone the chance to have "free" shoes for half of the actual shipping cost and I might even be able to recoup a good portion of the money I spent on them in the first place. Click here to go to a paypal page where you can get in the raffle. I'll do the drawing next Saturday (Feb. 14th) evening.

New Subject. What's wrong with this picture? (I call it, "PR gone wrong"): 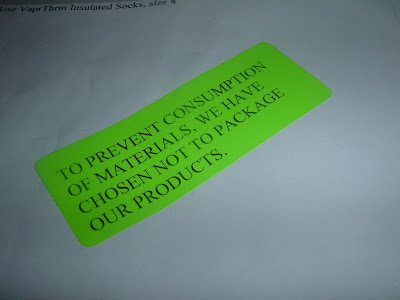 Moving On. The weather here has been horrible. It has either been raining or snowing for about two weeks straight and today a huge avalanche buried the road directly on the other side of the channel from our house. Those who live out that road (which is a dead end road) are pretty much stuck at home for however long it takes to clear the snow. Sucks really bad for those who live out that road but were in town when it happens. Not being able to leave your house for a couple days is bad enough, but not being able to go to your house for a couple days would be much worse.

This weekend is the Rocky Raccoon 100 mile race. I can't find any live updates but hopefully sometime tomorrow some results will start to be available. Andy Jones-Wilkins and Jamie Donaldson have great shots at being the male and female winners. Check out their blogs (linked in my sidebar) in the next few days to read about their races.

Several years ago I had a VW Jetta that I drove until it had 313,000 miles on it. I now have a Honda Civic that has 313,000 miles on it. Funny thing is that I don't think it's going to make it to 314,000. It pretty much has no brakes now and I really don't plan to put any money into such an old car when I don't even drive more than once or twice a week anyway. When I do need a car for something I can easily use jill's car or ride the bus. I think I'll put my car in the paper tomorrow for $50... or maybe I could raffle it off, although it's not worth as much as the shoes so I might not get any takers on the $5 raffle ticket.

That's all. Hope you're all having a nice weekend.
Posted by Geoff at 6:13 PM

I need to start posting my shoes, way to many just hanging out with hardly no use....it's been a very expensive journey to find the right friggin shoe!!! Still not totally satisfied yet with my shoes :-(

and glad your Calf is feeling better, have a great training week!

I wish we wore the same size shoe!

I wonder what shipping on a civic from Alaska would be...

I wish I knew the girls e-mail address that told me she couldnt pay $700 for that Civic 7 years ago because she needed a more reliable car for that much money. Then you turn around and drive it to Salt Lake from New York a day later HA HA!!!

I'm with you, Shawn. I remember leaving New York with Geoff in that car in Jan. 2002 and thinking, "This thing is never going to make it to Utah." Seven years, ~100,000 miles, umpteen trips up Parley's Canyon towing a 12-foot aluminum boat, even more trips from Salt Lake to the desert along gnarly dirt roads, two trips from the states to Alaska and back ... pretty good for $700. Did Geoff tell you he got his brakes to work again? Going for 314,000 baby!

I wish I wore your size shoe as well..... 313,000 miles, good for you! I currently drive a VW Golf and have 170,000 miles on it. Curious if you have any tips/suggestions on how you kept your Jetta going for so long? Any light you could shed on the topic would be helpful.

michael, the only reason i got so many miles out of my jetta was that a huge majority of those miles were slow miles out on the open road with little stop and go. i was pretty much living out of that car for a few years travelling all over the country. i drove slow (hardly ever above 50mph) so i could "see" more things and i spent almost no time in cities. the 180k that i put on that car in less than 4 years probably only had as much wear as 50k would have had in more stop and go conditions.

my civic though, that's a different story. i've beaten the hell out of that thing and it just keeps going. i'd be a rich man if i had a dollar for every "4-wheel drive only" road i've driven this car on. it still runs great now, it just doesn't stop at all. although i did discover that it was really low on brake fluid, when i filled it up it has OK brakes again. guess i'll have to find the leak and slap some duct tape on it... maybe i can get another 100,000 miles out of it :)

Shawn... wasn't that the one that was 'totaled' according to the insurance company and we were going off-roading up on tug hill and drive it on the lake? then Geoff had to go and ruin our fun and offer to buy it off you!

Nope, that was a different car.

This one was Robins car in college.

The time Krisy, My Father, and I were in Utah Geoff took us down a road with the car that 99% of the people would not even consider going down with a 4x4 truck. Kristy and I had to walk half the time because the bumper was getting caught.

This car I had sold to someone and it wouldn't turn off when they were done test driving it. Some electrical problem, they decided they wanted something more reliable for $700, so Geoff happened to be home and was like I'll take it.