I finished 5th today. I was very pleased with my place and with my time (7:12). My race however was far from perfect. The first 25 miles or so went very smooth. I felt very strong on the hills and ran near or in the front of the field that entire time. Through about mile 14 we were still in a group of 13 guys within seconds of each other. The hill leading up to Pantoll (mile 18) broke the field up a little bit with Me, Matt Carpenter, Some dude who was running his first ultra and I think ended up dropping out, and Kyle Skaggs pulling a bit ahead of the others. By the time we dropped back down to Stinson Beach (mile 21) it was a large group again. Then the climb up out of there had the same result, with the same 4 guys pulling away a bit, but this time Uli Stiedl was also right there with us. At the top of that climb Matt Carpenter made a move and none of us attempted to go with him. Somewhere after the mile 26 turn around I started to struggle. I was able to hold off Uli until mile 30 but by that point I was really hurting. Lots of cramping and lots of pain in my quads beginning to really stand out on the downhills. By mile 33 or so I was passed by a Japanese dude who went on to finish third (behind Carpenter and Steidl) and then at about mile 37 I was passed by Kyle Skaggs who finished 4th. At this point I was really struggling and thinking about pulling out at the next aid station. After thinking about it for about 30 minutes I decided that I didn't care if I was passed by another 10 runners, I was going to finish no matter what... and then shortly after that I started to feel a lot better. I knew it was almost certainly too late to catch back up to anyone in front of me but I gradually felt more and more confident that I could hold on to 5th place. I really enjoyed the rest of the run after that. I was still feeling pretty crappy on the downhills but the uphills started to click again and it was a really good feeling to break through such a horrible feeling and feel pretty strong again for the last 10 miles or so. I'll probably post a full report in a day or two.

A few pictures below. First one is of me crossing the finish line; second one is Matt, Kyle, and I shortly after the finish (notice the $10,000 smile on Matt's face); third one is the presentation of the prize money to the top 3. 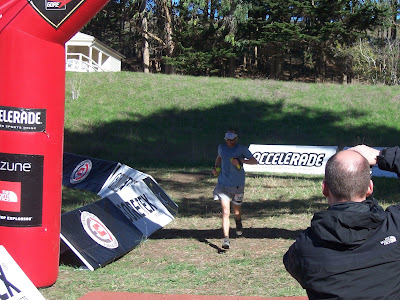 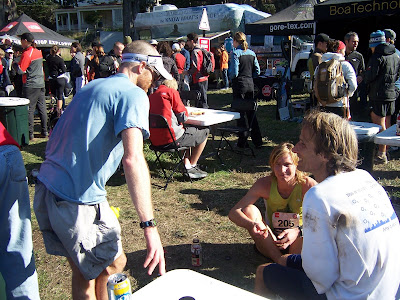 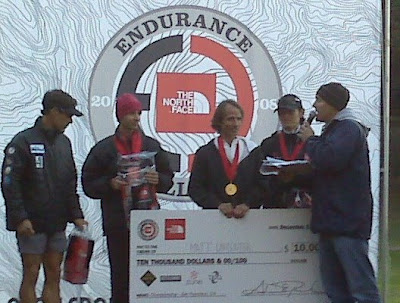 Congrats on an awesome run, thanks for the quick cap!
GR

Super job! Especially great job gutting it out - teaches everyone (me for sure) that if you just stick it out a little when it's rough, you'll come out on top. Really, great job today.
Tim

Great job. I am very impressed.

What is Dean doing standing with the top 3? He didn't edge you out did he (JK)?

Congratulations Geoff! I was cheering for you from the couch today and am happy to see your race report posted so quickly!

I'm so happy for you, we were all cheering for you from Alaska!

Congratulations Geoff - Once again you have had an awesome race - You have made us so proud not only with how well you did but that you are so strong minded that you finished when you were struggling so much. We are very sad that you didn't win any prize money so you could come home for Christmas but we understand that financially it is impossible. We love you and miss you.
Mom

Way to go Geoff. We're all really proud of you.

Sweet job!! The cool thing is that you most likely are not anywhere near you potential.

Good stuff Geoff!!! Hopefully they'll come to their senses and make the $10K race a 100 miler next year! ;)

Glad to hear you push through and finish in the top!

That was some field! The standings almost got predicted to a "t", but it was still total fun! Where did Japanese guy come from? I mean, besides Japan. Just wondering. Great race, Geoff!

Congratulations! With Carpenter and Stiedl in the race, you definitely had your work cut out for you. I see Carpernter running all the time here in Manitou. I know he supposedly has a full-time job, but I'm not sure I believe it, as he literally seems to be running ALL THE TIME. :-) Even when he's out with his kid, he's running and pushing the kid in the jogger stroller...

I've run with his Incline Club a few times, and they train over some tough (up, up, up) terrain.

Keep at it the way your are though, and I predict you'll be beating him and Stiedl soon enough.

Congrats Geoff! GREAT JOB. I understand holding back and taking 5th. Winning money would take all the fun out of the sport.

"Kyle Skaggs, Matt Carpenter, Uli Steidel, Geoff Roes, Leigh Schmitt, Michael Wardian, Hal Koerner, Guillermo Medina, Karl Metzler, Kami Semick, Susannah Beck, Nikki Kimball, and more illustrious names which I may miss, newbie that I still am after 3 years in ultra. That looked like a dream starting line for any race director! Something which I have seen so far only at Western States or the races sponsored by Montrail (e.g. Miwok)."

To be a upright lenient being is to from a philanthropic of openness to the in the seventh heaven, an gift to trusteeship undeterminable things beyond your own restrain, that can govern you to be shattered in unequivocally exceptional circumstances on which you were not to blame. That says something very important relating to the fettle of the principled passion: that it is based on a corporation in the unpredictable and on a willingness to be exposed; it's based on being more like a spy than like a sparkler, something fairly dainty, but whose acutely precise beauty is inseparable from that fragility.