Red Water In The Bottom Of The Shower

When I used to live in Utah I could always tell how good my weekend was by how dark the red color was in the water in the bottom of the shower when I would get back into town on Sunday afternoon. When you spend time outside in southern Utah the red dirt just gets onto your body, and then into your body, and eventually into your mind and heart.

Well, I am back in Salt Lake now after 6 days in Southern Utah and let's just say the water in the bottom of the shower today was about as red as it gets.

I was camped out in The San Rafael Swell for 5 days and in that time I rode my bike 300 miles, almost all on dirt. The first couple days were kind of mellow because I was still a bit tired from the Miwok. By Saturday though I was ready to go hard. 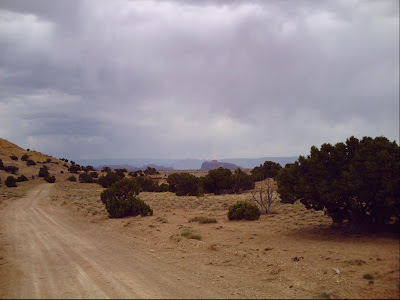 I only rode 35 miles on Saturday but it was probably my toughest day of riding all week. It was slow trail, lots of hike-a-bike through sand, technical stretches that were just beyond my abilities (technical desert singletrack used to be my strongest point as a rider but now I kind of feel like it's my first time everytime I ride tech. sections), and when I thought I was just about back to camp I got lost and ended up being out there for almost 2 hours more than expected.

And then Sunday I packed up for an overnight ride into The Maze district of Canyonlands. 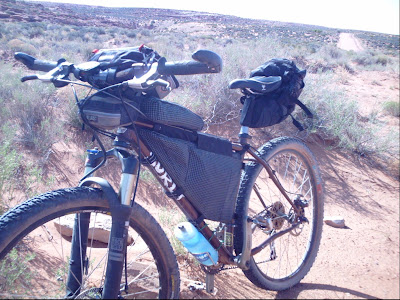 My bike loaded up for an overnight ride

I ended up riding 101 miles on Sunday and it turned out to be quite likely the best day I've ever had on a bike. The first 60 miles was a bit boring (scenery wise) but I was having a great time and feeling really strong. Once I got to the top of the Flint Trail my world was about to change drastically. 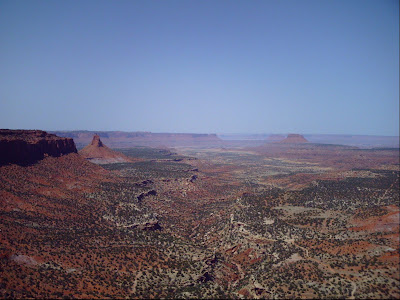 looking out from the top of the Flint Trail

I dropped off the rim and down to the valley below and suddenly I was in a much more majestic area with no one to be seen for miles on end. I continued South, toward Sunset Pass and saw no one for hours. 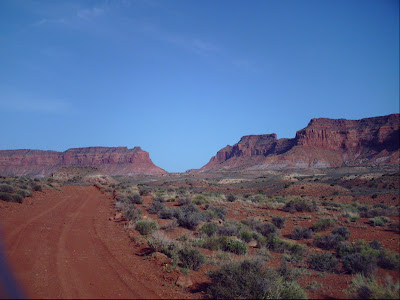 looking up toward Sunset Pass from the west

Picture the scenery of The White Rim, except NO PEOPLE. I decided I wanted to make it down Hatch Canyon and all the way to the Dirty Devil River that night. 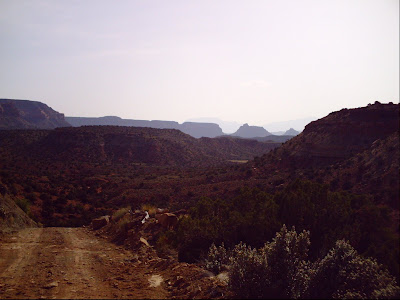 Looking into Hatch Canyon from just below Sunset Pass

By this point I had been going about 40 miles since I last saw anyone, or anything man made for that matter. About 5 miles from the river I saw a man hiking out in front of me. 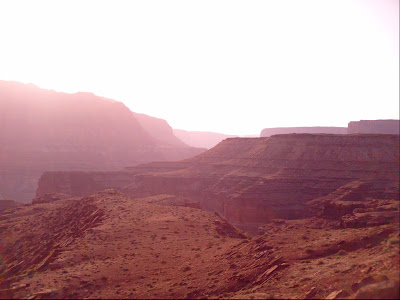 Almost down to The Dirty Devil River

I just assumed this was someone who was camped at the river and had hiked up the road for the view. Turns out rather that this guy had been camped back near Sunset Pass (more than 20 miles behind me) and his car was broken down. He waited for 2 days, never saw another person, and finally decided to walk out the 40+ miles back to the closest paved road. He was not doing so well when I saw him. He was almost out of food and water and said that every muscle in his body was aching and twitching. He seemed confident that he could make it to the river on his own so I went ahead and assessed my supplies while he made his way down.

I was able to spare almost 2,000 calories of food, much needed electrolytes (NUUN of course), purify water for him from the river, and gave him my bivy sack to sleep in for the night. 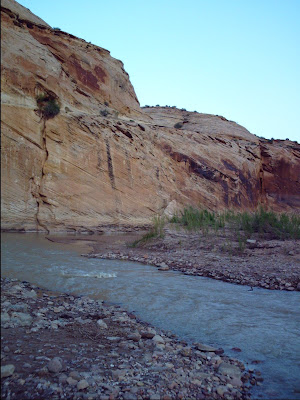 It was very windy that night. Neither one of us slept very well because of blowing sand, but he seemed to be feeling much better in the morning. He began the 16 mile walk out of Poison Spring Canyon and I rode ahead to Hanksville and phoned the local sheriff to let them know this guy's situation. The dispatcher made a sarcastic joke that it was a "slow day in Wayne County." If you've been to Wayne County Utah you might understand why this would be a joke. She would send someone down there right away to fetch this guy back to civilization.

Anyway, I'm back in Salt Lake for a couple days and then I'll be heading back South for some more desert fun. My plan is to make my way back up here by about June 2nd or 3rd and then ride from here up to the start of the GDR over the course of about 2 weeks.

Here are a few more pictures from the last couple weeks that I like. Two of the sunset on the ferry from Juneau to Bellingham and one of my car dwarfed by the Redwoods in Northern California: 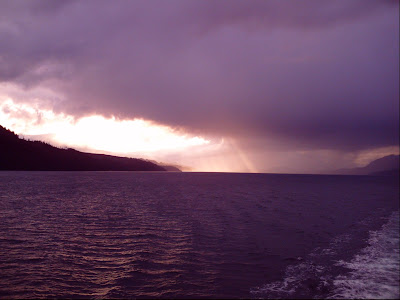 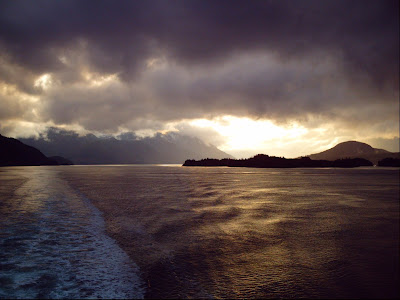 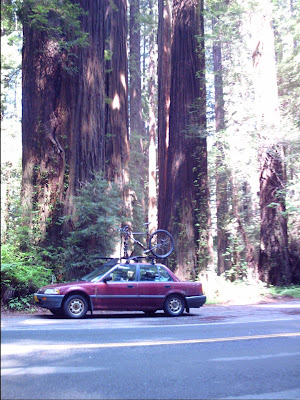 Good on you for saving Mr. Stranded.

Nothing better for a poor lost soul than to run across a guy with a bunch of calories in his bag.

Welcome to SLC, by the way!

great images Geoff! is that your red car... what a gem!

Hey Geoff,
Send me your email address if you can, I want to talk gear with you.
epicdesignsalaska@yahoo.com
thanks,

yeah wynn, that's my red car. it aint pretty but it's still running strong with 306,000 miles on it. i keep expecting it to die but it doesn't seem to want to.

Sounds like a great trip and very lucky timing for the stranded gent.