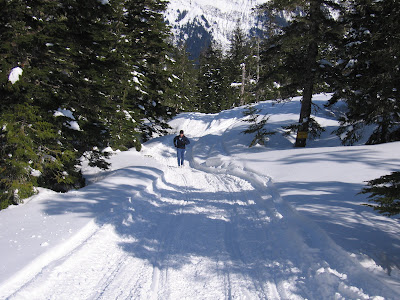 The forecast here in Juneau is for 4 days of sun!!! I hope to get out for some longer workouts the next few days.
Geoff at 9:11 PM 1 comment:

I used to consider myself a "morning person" but that has definitely not been the case for more than a year now. I'm rarely out of bed before 8 am and I do almost all of my workouts after noon. On the random days when I do get up early and do a workout I usually feel terrible for at least the first 20 or 30 minutes. This morning was one of those days when I decided to run first thing in the morning and much to my surprise I actually felt pretty strong. I also had no knee, ankle, or foot pain for the 3rd day in a row. This blog seems to be good luck. I guess I should have started this a long time ago.
Geoff at 8:23 PM 2 comments:

I hate artificial workouts. I don't care for treadmills and I could count the total number of indoor bike rides that I've ever done on my fingers and about 1/2 of my toes. There's just something about running or biking but not going anywhere that is not appealing to me. I do love running or biking simply for the sake of the activity, but even more so I love it as a way to be outside and to get from one place to another... even if all I do when I get there is turn around and come back home. Nonetheless, I put on a movie and hopped on the bike for 90 minutes tonight. And the strange thing is that I quite enjoyed it. I didn't miss being out in the slushy, dark, cold, wind, and rain. I guess this is a sign that I'm ready for spring. I'm ready to run up mountains and bike on dirt and snowless roads.
Geoff at 7:28 PM 3 comments:

With moderation in mind I went out for a mellow 6 mile run after work today. I felt very tired for the first half of the run but then coming home I had the wind at my back and started to feel warmed up and a bit stronger. Around mile 4 I noticed that my knee wasn't hurting me at all. For a few weeks now my ITband in my left knee has been bothering me but today I completed my run with no pain at all. I have also had some pain and swelling in my right ankle (mostly when skiing) and that was pain free today as well. It was a quite meaningless 6 miles but the fact that it came with no pain and that I felt stronger at the end of my run than at the beginning made me feel pretty good about building on today with a good workout tomorrow...
Geoff at 7:16 PM 2 comments:

There's nothing quite like that first road ride of the season. It's so quiet, light, and fast compared to riding a studded tire mountain bike. I always push myself harder and longer than I probably should on this first ride. I only did 25 miles today but I had already skied 13 miles and had not had enough to eat so by the time I finished riding I was completely depleted. I got home and began shoving food into my mouth. 45 minutes later I was replenished but felt an awful upset stomach for the next 3 hours. I hate when I do that. I'm not sure why but this seems to happen more often to me when I do a hard bike ride than a hard run. I think maybe my body is just more used to the abuse it receives from running.
Geoff at 9:00 PM 1 comment:

When I moved to Alaska I had never done a run longer than 17 miles, yet for whatever reason in December of 2005 I decided to train for a 50k in February of 2006. That race was fun in a painful way (although more fun than pain) and I felt myself becoming hooked as winter melted into spring and I began training for summer races. After a great summer of learning the ropes of "mountain" running I fumbled through the fall of 2006, not certain where my new desire in racing would take me. All year I knew that I would like to run the Susitna 100 in Feb. 2007, but it wasn't until early December 2006 that I actually decided to commit to it. I sent in my entry fee one day before the Dec. 31st deadline. I ran the Susitna 100 last month and now I feel more determined than ever to further pursue endurance racing. In my mind I'm often thinking about upcoming races and events that I want to participate in. There is a lot of uncertainty in where this will all take me, but my plan is to use this blog as a means of recording my slow progression further into endurance racing and ultra running.
Geoff at 9:22 PM 1 comment:

Seems as though everyone else in the world has a blog so I thought it was time to follow suit. Of course I still don't have a cell phone so perhaps I'm getting a little too far ahead of myself here.
Geoff at 9:17 PM 5 comments: 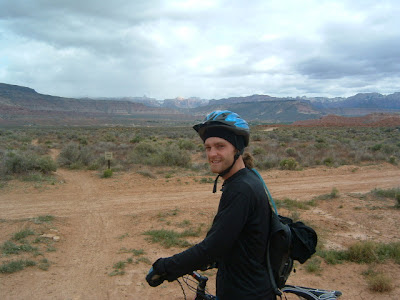